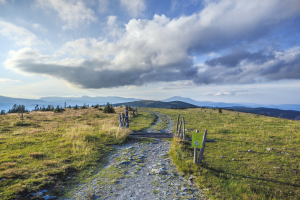 Landscapes, or: “Life is nowhere easy.”

If we imagine Ludwig Wittgenstein in an actual landscape, three sceneries immediately come to mind: First, the Norwegian Sognefjord with its rivers and rivulets – where Wittgenstein built himself a wooden house on the steep banks of the Eidsvatnet lake. Second, the lonesome shores of Ireland. And third, the “Bucklige Welt”, the area in Lower Austria where from 1920 onwards he spent six years as a primary school teacher in the towns of Trattenbach, Puchberg and Otterthal, a region he already knew from his childhood, since his parents owned a massive hunting lodge on the Hochreith near St. Aegyd.

John Donne‘s well-known Meditation XVII begins with the words “No man is an island entire of itself; every man is a piece of the continent, a part of the main”. If we read about Wittgenstein’s life as a primary school teacher in the hills of southern Lower Austria, we get the impression that to his peers he must have seemed like someone who aims at becoming an island in Donne’s sense.

His colleagues and neighbours certainly experienced him as such: a nobleman amongst the poor, an academic among farmers and workers, one, who never spoke in dialect, never frequented the local inn and seldom ever went to Sunday mass. An oddball who did not dress like a teacher, who did not greet on the street … – in short, a strange fellow who made “a curious impression” as Johanna Berger, a contemporary witness, remarked.

One common opinion holds that the places Wittgenstein had graced with his genius loci should be approached like a pilgrimage to saintly hermit’s home. “Hiking with Wittgenstein”, “Ludwig Wittgenstein: from Genius to primary-school teacher”, “Askesis in the South of Lower Austria”, “Wittgenstein-Cult in Trattenbach”, “The philosopher’s washbasin” (another myth: Wittgenstein never used it), “Perhaps you’ll have some time to philosophise in your holidays?” and “From Wittgenstein to summer toboggan run” are but a few titles of articles one comes across. And in the first, now out-of-print, edition of a documentary on Wittgenstein in Kirchberg am Wechsel one could find “documents from the life of a brilliant, lonesome man”.

What makes this landscape a “Wittgenstein-landscape”?